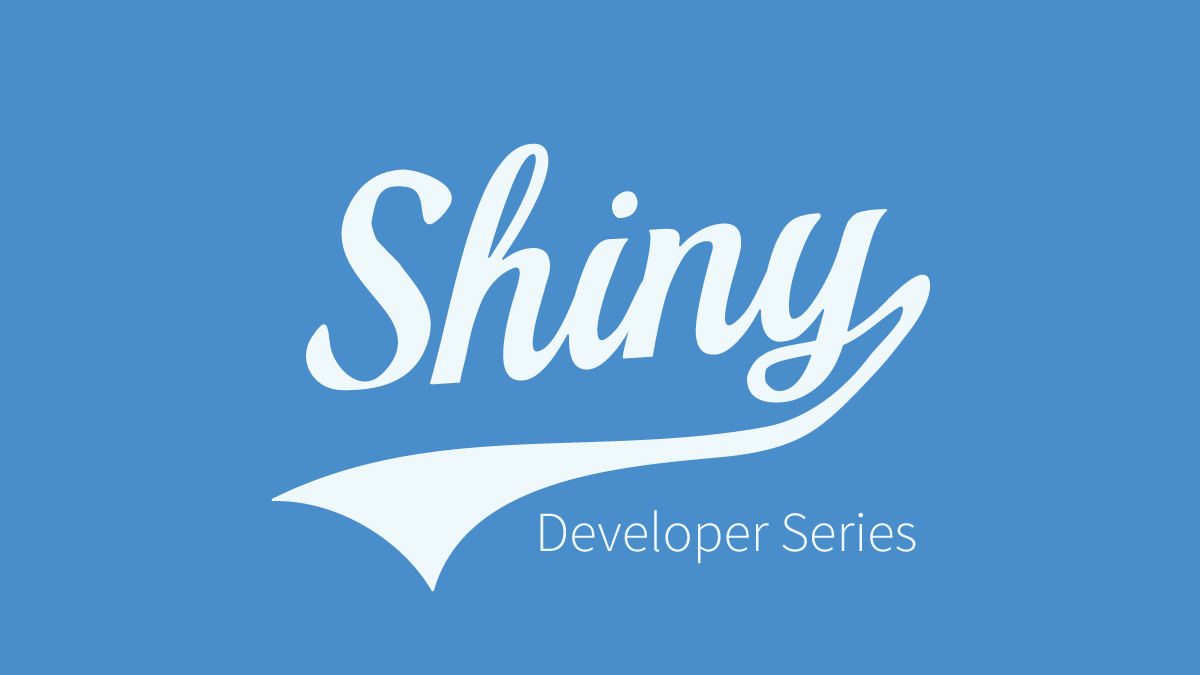 Shiny is one of the best ways to build interactive documents, dashboards, and data science applications. But advancing your skills with Shiny does not come without challenges.

Shiny developers often have a stronger background in applied statistics than in areas useful for optimizing an application, like programming, web development, and user-interface design. Though there are many packages and tools that make developing advanced Shiny apps easier, new developers may not know these tools exist or how to find them. And Shiny developers are also often siloed. Though the Shiny developer community is huge, there is rarely someone sitting next to you to sound out ideas about your app.

With these challenges in mind, the RStudio Community has partnered with Eric Nantz of the R-Podcast to create the Shiny Developer Series.

What is the Shiny Developer Series?

Our goal is to:

Each episode of the series includes:

We have already had three great episodes!

In Episode 1, Winston Chang talked about the key events that triggered RStudio’s efforts to make Shiny a production-ready framework, how principles of software design are invaluable for creating complex applications, and exciting plans for revamping the user interface and new integrations. Watch the episode - Show notes - Follow-up community discussion

In Episode 2, Colin Fay from ThinkR shared insights and practical advice for building production grade Shiny applications. He talked about the new golem package as the usethis for Shiny app development, why keeping the perspective of your app customers can keep you on the right development path, and much more. Watch the episode - Show notes - Follow-up community discussion

In Episode 3 - Mark Edmondson from IIH Nordic talked about how he incorporates Shiny components such as modules with googleAnalyticsR and his other excellent packages. He dived into some of the technical challenges he had to overcome to provide a clean interface to many Google APIs, the value of open-source contributions to both his work and personal projects, and much more. Watch the episode - Show notes - Follow-up community discussion

We have episodes scheduled for the rest of the year.

If you’ve ever wanted to build an elegant and powerful Shiny UI that takes advantage of modern web frameworks, this episode is for you! David Granjon of the RinteRface project joins us to highlight the ways you can quickly create eye-catching dashboards, mobile-friendly views, and much more with the RinteRface suite of Shiny packages.

Nick Strayer on Novel Uses of JavaScript in Shiny Applications

Shiny has paved the way for R users to build interactive applications based in javascript, all through R code. But the world of javascript can bring new possibilities for visualizations and interactivity. Nick Strayer joins us in episode 5 of the Shiny Developer Series to discuss the ways he’s been able to harness the power of javascript in his projects, such as his shinysense package.

Yang Tang on Advanced UI, the Motivation and Use Cases of shinyjqui

Sometimes your Shiny app’s UI needs a little extra interactivity to give users more flexibility and highlight key interactions. For example, one user might not like the initial placement of a plot or data table and would like to move it around themselves. In episode 6 of the Shiny Developer Series, we will be joined by Yang Tang to discuss the development and capabilities of the powerful shinyjqui package that provides Shiny developers clean and intuitive wrappers to the immensely popular JQuery javascript library.

Victor Perrier & Fanny Meyer on dreamRs, and Tools to Customize the Look & Feel of Your App

Have you ever wanted to ease the effort in customizing the look and feel of your Shiny app? Victor and Fanny are behind dreamRs, a large collection of R packages dedicated to Shiny developers, many of which are designed to help you make your Shiny app as professional looking as possible. They will talk about how moving beyond Shiny’s default options can improve your users’ experience.

Nathan Teetor on the approach and philosophy of yonder

We have seen the Shiny community grow immensely with excellent packages built to extend the existing functionality provided by Shiny itself. But what would a re-imagination of Shiny’s user interface and server-side components entail? Nathan’s yonder package is built on Shiny, but gives developers an alternative framework for building applications with R. Eric will talk with Nathan about what shiny developers can learn from this approach and how he’s approached such an ambitious undertaking!

Talk about this article on Community
Tags:
shiny community Shiny